The main stadium of the Debreceni EAC team is Olah Gabor Sports Hall in Debrecen, Hungary. 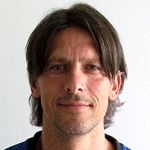