FC Botoșani First to score 4 of 5

Dinamo București First to concede 8 of 8

Dinamo București First half loser 4 of 5

FC Botoșani First to score 4 of 5 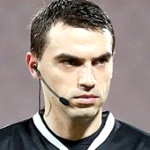