KAA Gent First to score 4 of 5

RFC Seraing Both teams scoring 4 of 5

The match will take place at the stadium LE STADE DU PAIRAY in the city Seraing, Belgium. 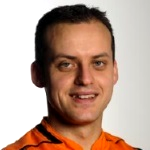