Head Referee - Ricardo Baixinho. At the moment he is 35 years old. Accounting for yellow and red cards: Ricardo Baixinho played 38 matches, noted 221 of yellow cards and 10 of red. 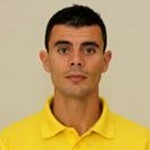