Deportivo Alavés Both teams scoring 7 of 8

Deportivo Alavés First to concede 4 of 5

Rayo Vallecano Both teams scoring 5 of 7 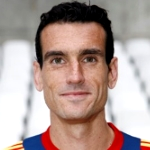