SL Benfica First to score 5 of 7

SL Benfica First half winner 5 of 7

Moreirense First to score 4 of 5

Moreirense Both teams scoring 4 of 5 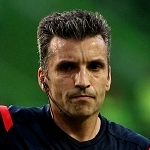