Osasuna Both teams scoring 4 of 5

Elche CF First to score 5 of 7

Osasuna Both teams scoring 4 of 5

Osasuna First to score 4 of 5 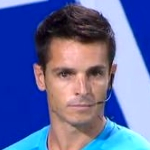