Aston Villa Both teams scoring 7 of 9 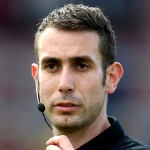