In the team Barcelona 35 players. Legionnaires composed of: 15 (42.9%). Average age of team players 25,1 years. The total value of the team players is 838,679,000 €. The highest-paid player Barcelona is Marc-André ter Stegen. Physically, indicators, nationality, position, market value and a list of starting compositions are available on the player’s page.

Xavi — head coach of the team Barcelona. Xavi spent 128 of the match as part of the team coach Barcelona. Won 82 wins, 22 draws and 24 defeats. Points scored: 268. The number of points scored over a career indicates the effectiveness of the coach.

The main stadium of the Barcelona team is Camp Nou in Barcelona, Spain. Stadium capacity Camp Nou is 99 354 people.

Team Next Match Barcelona will take place 23rd July 2022 : Real Madrid – Barcelona. On the matches page you can track the series, team statistics, the history of the movement of the coefficients, as well as videos of interesting moments. 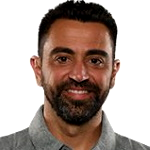