In the team CD Nacional 31 players. Legionnaires composed of: 31 (100%). Average age of team players 26,9 years. The total value of the team players is 7,964,000 €. The highest-paid player CD Nacional is Francisco Ramos. Physically, indicators, nationality, position, market value and a list of starting compositions are available on the player’s page.

Costinha — head coach of the team CD Nacional. Costinha spent 156 of the match as part of the team coach CD Nacional. Won 54 wins, 40 draws and 62 defeats. Points scored: 202. The number of points scored over a career indicates the effectiveness of the coach. 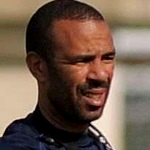