In the team CE Europa 5 players. The total value of the team players is 0 €. The highest-paid player CE Europa is Joel Arimany. Physically, indicators, nationality, position, market value and a list of starting compositions are available on the player’s page.

The main stadium of the CE Europa team is Nou Sardenya in Barcelona, Spain.

Team Next Match CE Europa will take place 2022-10-09 09:45:00: UE Tona CE Europa . On the matches page you can track the series, team statistics, the history of the movement of the coefficients, as well as videos of interesting moments. 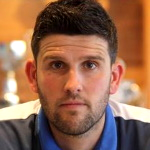