FC Paradiso takes part in the championship 1. Liga. You can find the championship standings, current results of the teams and the schedule of upcoming matches on the page: Standings 1. Liga.

In the team FC Paradiso 22 players. Legionnaires composed of: 22 (100%). The total value of the team players is 0 €. The highest-paid player FC Paradiso is Patrick Rossini. Physically, indicators, nationality, position, market value and a list of starting compositions are available on the player’s page.

Team Next Match FC Paradiso will take place 2022-10-08 14:00:02: FC Gossau FC Paradiso . On the matches page you can track the series, team statistics, the history of the movement of the coefficients, as well as videos of interesting moments. 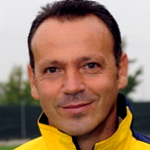