In the team Municipal Grecia 32 players. Legionnaires composed of: 32 (100%). Average age of team players 27,0 years. The total value of the team players is 2,950,000 €. The highest-paid player Municipal Grecia is Abraham Carreño. Physically, indicators, nationality, position, market value and a list of starting compositions are available on the player’s page.

The main stadium of the Municipal Grecia team is Estadio Allen Riggioni in Grecia, Costa Rica. 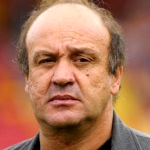