In the team Real Zaragoza U19 1 players. 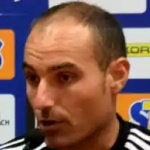